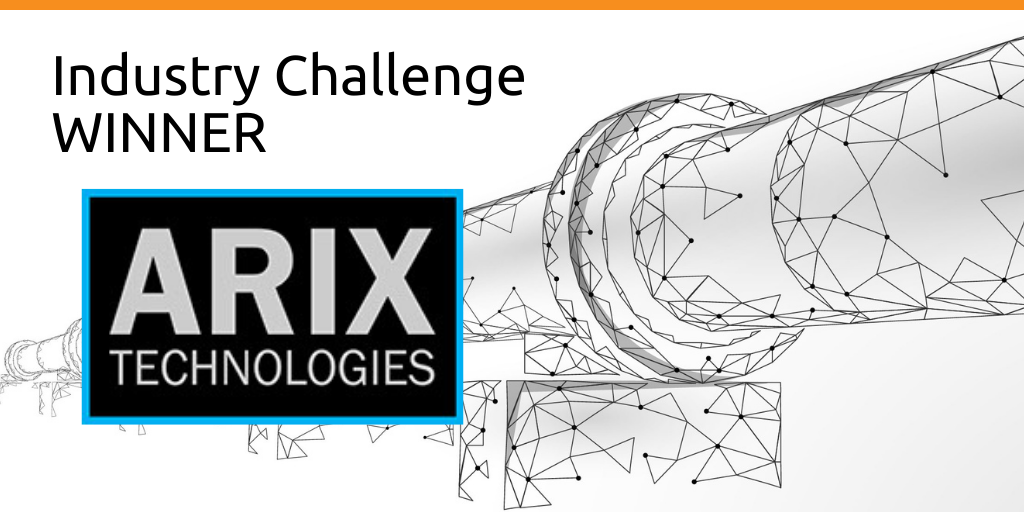 The Industry Challenge is an initiative of program sponsors Phillips 66, Royal Dutch Shell and Woodside Energy, and led by Quasset to focus on demonstrable robotic solutions for inspection of Corrosion Under Insulation (CUI) on non-magnetic piping systems. There is a strong drive in the oil and gas industry to replace traditional CUI inspections with new robotic tools that can traverse piping racks and access susceptible areas to CUI. Traditional CUI inspection is manual, labour-intensive and expensive; new robotic solutions can reduce maintenance costs as well as safety risks associated with piping system inspections.
From the four companies shortlisted to participate in the Industry Challenge, ARIX Technologies from the United States emerged as the overall winner for the best new robotic solution for inspection of Corrosion Under Insulation (CUI) on non-magnetic piping systems. As winner of the Industry Challenge, ARIX Technologies receives a reward of €25.000 and the opportunity to further their solution and its application through the next phases of a multi-year CUI development program.

The solution ARIX Technologies presented was acclaimed for a well-engineered system that was overall very impressive. The system had great mobility on piping systems and mechanical adhesion to the pipe was an advantage over the other systems. Areas where ARIX Technologies excelled included the positioning on the bottom of a pipe and tee, the transition from pipe to elbow to pipe, obstacle avoidance, scanning patterns in straight pipes, and its fall protection system. The solution’s design was innovative with great potential for further development.

Dianna Liu, President & Founder of ARIX Technologies:
“Working with Quasset, their sponsors (Shell, P66, & Woodside Energy), and other energy companies in the CUI Challenge was an incredible opportunity. This challenge was designed with customer needs in mind and offered a real-world trial for participants. The feedback was invaluable for ARIX, highlighting where we can immediately add value in CUI detection while also informing our long-term technological roadmap. We are honored at being selected as the winner and appreciate the hard work of both the sponsors and the competitors.”

In the evaluation of FIU’s solution, it was noted that the design of their system was innovative and would prove beneficial in tight spaces. The ability to move both longitudinally and transversely helped significantly with scanning patterns, and with further development their solution could become a part of the future robotic toolbox for piping inspections and maintenance.

The evaluation of ICM’s solution included that it was a great and interesting concept with excellent maneuverability, with the overall ability to address a need in the oil and gas industry. Although ICM’s solution still requires development, the concept is on the right track as it is lightweight, can get into position relatively easily, and mobility and transitioning are impressive.
For Voliro Airborne Robotics, the evaluation concluded that they provided one of the best and most capable demonstrations of the Industry Challenge. The freedom to fly to the different locations gave their technology an edge over other technologies that are limited to remaining on the pipe surface. To further development, it was suggested that this system being tested (iteratively) in the field, with follow-up re-design and new field testing.

Improving detection and mitigation of CUI

Corrosion under insulation (CUI) can cause significant operational, economic and safety challenges.
A large number of critical assets such as vessels, piping and tanks are insulated with non-magnetic materials that are undulating, curved and often irregular and therefore place the asset at risk of CUI. Often, due to the presence of the insulation material, identifying CUI can be challenging until it is too late, leading to extended shutdowns, expensive emergency repairs, or a loss of containment. Current inspection tools available have limitations in their ability to detect corrosion accurately, their ability to access susceptible locations, or require the removal of the insulation material.

Quasset is managing and executing a multi-year program on behalf of several major oil & gas companies to improve detection and mitigation of CUI supported by robotic technologies.
The Industry Challenge was initiated to focus on demonstrable robotic solutions that can access susceptible locations for CUI on non-magnetic piping systems and can reduce the maintenance cost and safety risks associated with piping system maintenance.

4 November 2020
Share this post
Share on FacebookShare on FacebookTweetShare on TwitterPin itShare on PinterestShare on WhatsAppShare on WhatsAppShare on LinkedInShare on LinkedIn
Recent News
Go to Top
We use cookies and other tracking technologies to assist with navigation, improve our products and services, and assist with our marketing efforts. By continuing to use this site you agree to our use of cookies in accordance with our privacy policy. Find out more.